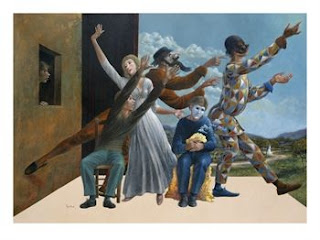 Prologue:
‘What a meeting that was, the two of them sparring like two male buffalos.  She just sat there smiling smugly, chirruping away, playing one off against the other.  She got her comeuppance in the end; when they found she hadn’t sorted-out the finance team.  Well the rest of us could see it coming from a mile away.  Jealousy, intrigue, and rivalry.  It was pure theatre.’  Pure Commedia dell Arte that is.
What possible interest might sixteenth century Italian theatre be to people seeking ways of transforming the way they work?  As the ‘cast’ enter the stage, each in their distinctive costume we begin to recognise familiar characters and keenly anticipate how they will react as the plot unfolds.
The foolish, the arrogant and the scheming all meld in familiar situations; the outcome uncertain. What we do know is that they will give their observers much amusement as they second-guess the actions of their fellows and manipulate things through alliances, conniving and misdirection to achieve their ends.
Now you tell me that this isn’t a good description of the meeting you sat through yesterday.
Do you recognise any of these characteristics of your colleagues in these stock Commedia characters?
Harlequino:
He acts stupid but is cunning, ingenuous, diffident, a busy body. He’s a critic.  He can usually only entertain one idea at a time but rarely considers the consequence of it or learns from the experience. Never short of a solution even if he has no expertise in whatever it is.
Pantalone:
He has a long memory and never forgets or forgives the slightest past transgression.  Pantalone will offer money to get whatever he wants.  He will not, however, pay for anything.  He is usually trying to pass himself off as something he isn’t.
The Doctor:
Wise, deep, difficult to understand – talks too much. Generally has little idea what he is talking about.  To make himself sound important, he will babble on forever. The other characters (surprisingly) hardly ever question what he is talking about; since he is a doctor, he must be right.
The Captain:
A hero, a leader, an adventurer, a winner.  He is extremely arrogant, with a huge ego, and he constantly brags about his many accomplishments.  Of course, all of this is a lie.  He often has a very long and important sounding job title.
Pulcinella:
He is either stupid pretending to be clever, or clever pretending to be stupid, either way, he is always pretending and self-centred. He is suspicious and disrespectful of anyone from outside, how can they possibly know anything about his business?
The scenarios were always based around lack of understanding, poor communication, spells and magic. Possibly like the scenarios played out in many organisations, with tragic consequence.
At your next possible opportunity, detach yourself from the business of your meeting.  Watch the action unfold as if you were in the audience at the theatre.  As you witness the nonsense of ego, politics and posturing, consider the thought it doesn’t have to be like this.  Ask what would the performance be like if you were witnessing a truly ‘top-performing’ team or even what would you be doing to play your role in a great ensemble.
Toggle the Widgetbar