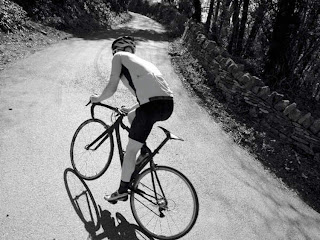 Last Saturday I challenged my youngest son to accompany me on a 78 mile bike ride through the English Peak District. A clue to the topography is in the name given to the area.  This was to be a long ride up many steep hills, 2,500meters of climb to be precise.  I had initially planned a 60 mile ride but in order to get in the best cafes, it became slightly longer.  ‘It’s only 18 miles more’, I said as he prepared for the off, ‘that’s hardly anything’. As a scientist researching for a doctorate, he pointed out that 18 miles should be described as a ‘significant increase’ rather than ‘hardy anything’.  So, goals change, that’s life.
A bright breezy day greeted us as we set off.  Soon, he was head down into the wind while I tucked in behind.  Youth before wisdom!  That was until he dropped me and I had to struggle into the wind under my own steam. The miles quickly passed, conversation turned to the flaws in my earlier blog on queuing.   Teslar came under scrutiny, as did the exact dates for wassailing!  Where was the mention of queuing theory?  As someone having trouble breathing at the time, we had a rather one sided debate.
Cafes came and went, conversations ranged from deep intellectuality to food; in reality, mostly food. We saved the sting in the tail till near the end, Ewden Valley North side is a monster hill but when this is separating you from a nice cup of tea it was soon overcome.  We had a great day out, all obstacles overcome, and a few laughs on the way.
I know my editor, like many of you will be thinking, ‘where is this going?’  How is this about change?
Any training is about change.  We invested our time and effort, putting ourselves under stress to effect a physiological change.  This was one of many such rides to prepare ourselves for the Marmotte in July.  We have no illusion that one great ride will be sufficient to bring about the lasting improvement in fitness needed to do a 118 mile race with 5000m of Alpine climbs.
Our story is not unlike the journey many organisations with whom we work undertake.  Like any major improvement it takes a particular mindset: To achieve our goal what attitudes and behaviours are required?  What skills and competencies do we need to develop and practice?  What support do we need? What rewards signify our progress (cafe stops)?  Most importantly we have to be emotionally engaged otherwise why would we do it?
So we know where we are going, we understand the magnitude of the challenge, we’re up for it, so let’s have some fun on the way.
What will your story be?
Toggle the Widgetbar