Are you not curious? 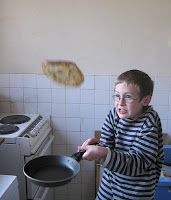 Turn over a stone in a stream to find if there is anything beneath.  Want a back stage pass to see what the performers are really like? Stand on the footplate of a steam engine to get the drivers view. Flip.  Look at something from a different perspective.  From the outside – in and suddenly you open up a new world of possible improvement.  A different way of thinking.  Flip thinking.
The concept has been around for as long as man has hunted for food.  Anthropologists have shown through their study of indigenous hunters that our ancestors realised that they would catch more prey if they thought from the perspective of what they were hunting, where would it feed, how would it react, how did it think. So if this is a primeval instinct why is it that people are so reluctant to think in this way?
Maybe it’s because really empathising with people, situations or behaviours isn’t easy.  We are different from them, we understand how we would react, that’s easy, after all we do that every day.  Russian theatre director Constantin Stanislavsky (An Actor Prepares,1936) the doyen of actors, revolutionised acting  by asking his actors to ‘be’ the character they were playing.  He wanted his performers to really understand their motivation, lifestyle, and background. One of his infamous exercises is to ask the actor to ‘be a tree’ to help them open up their imaginations.  His ‘method’ takes years of practice to master but the performance of the great actors is testament to its effectiveness.
Flip thinking encourages people to take a different perspective, one which can open up new possibilities and opportunities for improvement.  Few leaders and managers find this easy, they focus on their activity from a process point of view.  They understand what their role is, what their team needs to do, what has to happen to enable them to hit their targets, but this often has no empathy with their customer.  Opportunities for improvement are missed. Doing the same old thing results in continued inefficiencies.  They become very good at doing things which don’t matter.
As one sage remarked, ‘Their ladder is up against the wrong wall’.  Maybe it should be around the flip side?
Toggle the Widgetbar