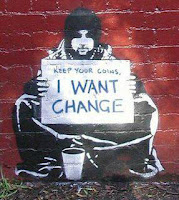 I have a fascination with people, situations, products and historical events which have changed the way we live.  Let’s be a bit controversial today.

“The greatest crimes in the world are not committed by people breaking the rules but by people following the rules. It’s people who follow orders that drop bombs and massacre villages” – Banksy

Banksy is a graffiti artist who likes to keep his identity anonymous.  He wasn’t the first Graffiti artist, I think we have to attribute the creation of the genre to our ancestors who crafted images upon the walls of caves.  In fact he didn’t even invent modern graffiti which achieved popularity / notoriety with the rise of hip-hop in the 1980’s.  He didn’t create the stencil technique and style used for many of his pieces; this has been attributed to French artist Blek le Rat. 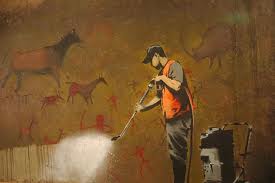 No, what makes Banksy a Paradigmeer is he has made this type of expression popular.  Ask many graffiti artists what they think of Banksy’s work and they retort that he has ‘sold out’.  Ask art critics for an opinion and they are dismissive.  Ask some people and they say it is just vandalism and encourages others to deface public property.  Ask an art teacher and they will tell you Banksy has encouraged people to create art.
What he has done is to challenge the rules of art and political expression in a way that has captured the attention of a wide audience. Most importantly he has made it accessible and acceptable. 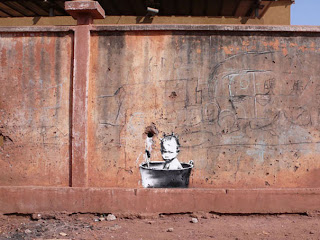 With so many people involved in addressing structural change there are some basic principles which have proved successful for Banksy.

1.       Clearly identify what you want to improve.
2.       Put your intention out there for all to see.
3.       Make it accessible to all, so they can become involved and help to shape the future.
4.       Have a strategy for coping with your critics.  Critics are protective of the status quo.
5.       Use humour to temper emotions in order to allow your communication to become constructive.
6.       Park any ego.  The art, the message, the customer, the patient, the issues which need addressing are more important than status and ego.
7.       Be passionate about what you are doing.  It has to mean something to you otherwise why should it mean anything to anyone else.
My favourite Banksy quote: “One Original Thought is worth 1000 Meaningless Quotes.”
Toggle the Widgetbar